Shir haShirim 7:2 says, “How beautiful are your feet in sandals,” which led Rabbi Akiva to insist that his son Joshua always covered his feet. The reason? A barefoot was a sign of sensuousness, luxury, and pleasure.
In the Talmud, the rabbis direct a person to “sell the roof beams of his house to buy shoes for his feet” (Shabbat 129a).

The view of many is that you should dress as if you’re standing before a king or other royalty (Orach Chaim 91:5). This thought was elaborated in a Masorti responsa “Women and the Wearing of Pants” from Israel, in which Rabbi Chaim Weiner stressed that “In the synagogue, we must be much more scrupulous about modesty. We must honor the place and the occasion. The guiding principle must be to view the synagogue as a ‘small sanctuary’ and prayer as the standing of man before God. And thus, we must dress in the synagogue as we would dress to go greet a VIP, in dignified and modest clothing.”

On the other hand, Mishnah Berurah 91:13 says that in a place where it is acceptable to wear sandals before a VIP or royalty it also is acceptable to pray in sandals. Likewise, in Hilchot Tefillah 5:5, Rambam rules according to a “when in Rome” philosophy, saying

“One should not pray wearing [only] his undershirt, bareheaded, or barefoot if it is the custom of the people of that place to stand before their most respected people with shoes.”

The information is (Taken from a site ) by Shaukat Masih. 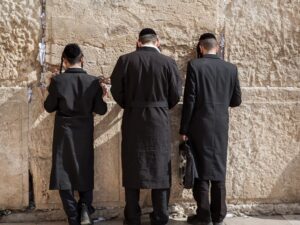 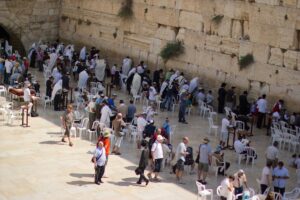